There are lots of 360 degree cameras that are available now in the market. ZTE Corporation which is a Chinese company and also the comes under top 5 phone manufacture company in its home market released its first Virtual Reality camera and named it as ‘ ZTE Nubia NeoAir’. 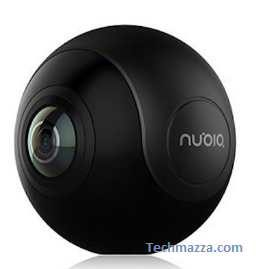 It is a 360 degree camera which gives heavy completion to other 360degree cameras like Samsung Gear 360 VR camera, Nikon KeyMission 360 etc… ZTE Nubia NeoAir that helps you to take videos and photos in 360 degree.


Here the following comes with detailed specification of ZTE Nubia NeoAir which was released on 6th April 2017.

This VR camera is the first outcome of Chinese developers who made Chinese phones. Let us weight for its upcoming versions of VR camera that can perform even better from this because when compared to other Virtual Reality cameras the latest Samsung Gear 360 VR camera (2017) has lot of features than this. And also Chinese VR cameras Mi Panaromic 360-degree camera which was launched by xiaomi also has some advanced features. This ZTE Nubia NeoAir also good for fewer prices. The USB TYPE C can used to connect the Android phones such as Xiaomi Mi 4c, Nubia Z17 mini, Nubia Z9 Mini, Huawei Mate 7 etc…

You can also leave your comments in the below comment box about the product.